No Science to Goodbye - by Annabel Wilson, 2016 R.A.K.Mason Fellow 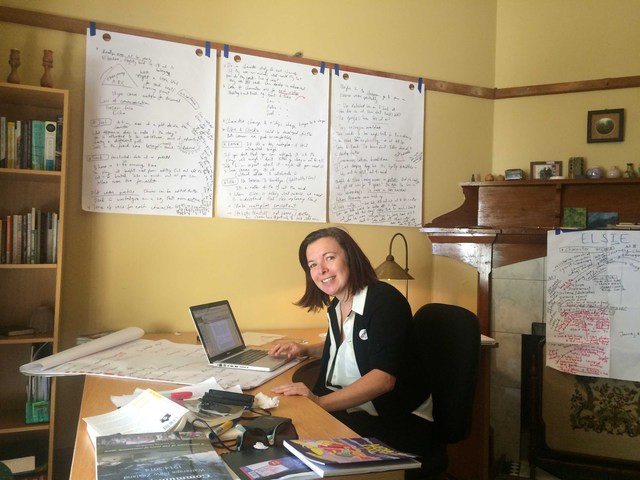 Annabel Wilson has been developing the feature length play 'NO SCIENCE TO GOODBYE' during her three-week Fellowship at NZ Pacific Studio -- an exciting new fictional work of people and place. The protagonist is a young expat who returns to her rural hometown and discovers many unanswered questions which unravel the very fabric of her world. It is a poetic yet rational story of risk, love and loss: the risks we take within our relationships.

NZ Pacific Studio invites the public to the play reading on Saturday, 8 October, 4pm, Mount Bruce Community Hall, on the corner of State Highway Two and Kiriwhakapapa Road. Supported by NZPS and the Tararua District Creative Communities Scheme, the reading will be followed by a korero session when the audience can share their thoughts about the play and the issues it raises. The reading is a rare opportunity for the community to engage with and enjoy the debut of a theatrical piece written in the immediate area.

Tickets at the door

Annabel Wilson was selected for the R.A.K. Mason Writing Fellowship over applicants from Australia, Ireland, and around New Zealand. She has a Master’s Degree in Creative Writing from Massey University, has performed at various literary festivals, and has been published by Blackmail Press and Otago Daily Times, among other publications. She was also recently awarded an Australasian Association of Writing Programs (AAWP) Prize which entitles her participation in the 2016 Ubud Readers and Writers Festival, and publication in the journal Meniscus.

The R.A.K. Mason Writing Fellowship honours the foremost New Zealand writer R.A.K. Mason (1905-1971), with his intense energy, commitment to literature, and interest in the ways literary genres inform each other. Annabel Wilson’s play is crafted through drama, cinematography and music.

The R.A. K. Mason Fellowship is sponsored by a generous donation from Derek and Chris Daniell of Masterton. A charitable organisation, New Zealand Pacific Studio endeavours to provide up to ten sponsored Fellowships each year, such as for an emerging artist, young female artist, poet, an artist responding to ANZAC themes, a visual artist, musician, an environmental artist, etc, and welcomes community support to make this a reality.

The inaugural R.A.K. Mason Writing Fellow, Tracy Farr (2014), spent her three weeks at NZ Pacific Studio working on her second novel, The Hope Fault, which is set to be published by Fremantle Press in 2017. In 2015, during Madeleine Slavick’s Fellowship, she exhibited her photography and performed her poetry at Aratoi Museum in Masterton and went on to show the work at the Wallace Arts Centre in Auckland in 2016.

About New Zealand Pacific Studio: Since 2001, hundreds of creative people, academics, and environmentalists have stayed at the centre to work on their projects. The five-acre facility adjacent to Pukaha has several studios, four fireplaces, a cottage, sauna, and a large library. The centre is celebrating its 15th anniversary in 2016.