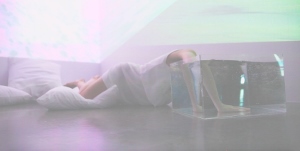 Join two international dance/video artists currently in the Wairarapa for an afternoon of dance and film at ARATOI. Sunday 8th July, 2-3pm.
Both artists are in residence at New Zealand Pacific Studio, an international residency centre in Mount Bruce, founded in 2001.

CONTEMPORARY DANCE by Aurora Lagattuta, who will present a selection from a dance which will premiere at Movement Research, in New York City, in September 2018.

A SHORT FILM by Maya VanderSchuit. "Cetacea" features underwater footage and choreography by Lagattuta shot off the coast of San Diego. The film featured at the 2018 CaliT2’s IDEAS Festival for Art and Technology.

AURORA LAGATTUTA
Aurora Lagattuta is a Chicago native and is presently based in Southern California. Her work has been described as “bizarre and beautiful” as well as “transformational” and “otherworldly” by the Huffington Post.
Lagattuta has been presented at Theatre Row in New York City, Electric Lodge and Highways Performance Space in Los Angeles, Cindy Pritzker in Chicago, k77 in Berlin, The New Space in Brussels, La Caldera in Barcelona, Café de las Artes in Santander, Spain and by Malashock’s Engagement Ring, Vanguard Culture and the Mingei Museum in San Diego.
She holds a B.A. in Theatre from Fordham University at Lincoln Center, NYC, and she is currently an M.F.A. Contemporary Dance candidate at the University of California at San Diego, where she received the prestigious San Diego Fellowship. www.auroradances.org

MAYA VANDERSCHUIT
Maya VanderSchuit is a San Diego native and an MFA candidate at University of California, San Diego. She received her BA from University of San Diego with a double major in Visual Arts and Art History. VanderSchuit has exhibited at San Diego Art Institute, Calit2 Theatre, UCSD’S Visual Arts Gallery, Birch Aquarium, USD’s Visual Arts Gallery, and IKO Studios in Los Angeles. Her work has been awarded the SURE Grant and AS Grant. mayavanderschuit.wordpress.com