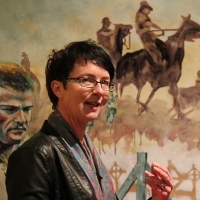 Rebecca Holden is a New Zealand artist, she gained an MFA from Massey University, Wellington in 2013. Her paintings employ visual narratives to explore the multiple guises of humanity. Rebecca was artist in residence at Expressions Whirinaki in 2014 and Samuel Marsden Collegiate School in 2017, and has taught at Massey University School of Fine Arts. Rebecca exhibits regularly in New Zealand and had her first international exhibition in 2017 with her work ‘Sand in the Apricot Jam’ in Israel as part of the WW1 Centenary commemorations.

Rebecca was awarded the 2018 ANZAC Bridge Fellowship at NZ Pacific Studio. ‘A Home Away From home’: Through painting and drawing Rebecca explored the story of the Aotea Convalescent home for New Zealand soldiers in Heliopolis, Egypt during WW1. The home was staffed by nurses from Wairarapa, Wellington and Whanganui. It was funded by the efforts of women’s groups from Wairarapa, Whanganui and Rangitikei regions, who saw the importance of a ‘home away from home’ in the recovery of our soldiers who were wounded or who fell sick in the Sinai & Palestine campaigns.

While on the residency I worked on drawn and painted portraits of the nurses and other works that made reference to the Aotea Home. I also did a workshop with the students of Mauriceville School where they painted tiles that referenced a tile pattern from the Aotea Home as well as tiles that depicted their own interpretation of the home and the WW1 campaign in the Middle East. These tiles were then formed into a cross shape to represent the nurses and unveiled at the ANZAC ceremony at Kaiparoro Bridge.

In addition to this I offered to mentor students at the local colleges and was invited to talk with a student at Wairarapa College.