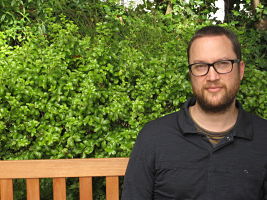 Ryan is a composer, sound designer, and writer. Most of the writing he has done up until now has been for radio features. One of his favourite projects so far has been the award-winning theatre show Traces: Ghosts From The Archives (based on 19th century ghost stories from New Zealand) where he was both dramaturge and composer. He has been featured twice on Radio New Zealand

During his residency, he worked on his first novel.